I began the challenge to make engaging compliance training in 2003.
Since then, rapid production software and the platforms to host and track usage have emerged and developed. But, the approaches to creating engaging learning content have not significantly changed.

Card Factory had chosen to custom make their training to maximise its relevance to their staff. I wanted to contribute to this by using real images of their three main locations as much as possible in place of generic cartoon images.

I wanted a drag and drop exercise covering two screens to replace a static, narrated animation and force engagement. The user has to move right and left, to identify all the hazards.

Inside the Shop and Head Office

Complex slide using layers and variables, allowing the user to find guidelines relevant to them. 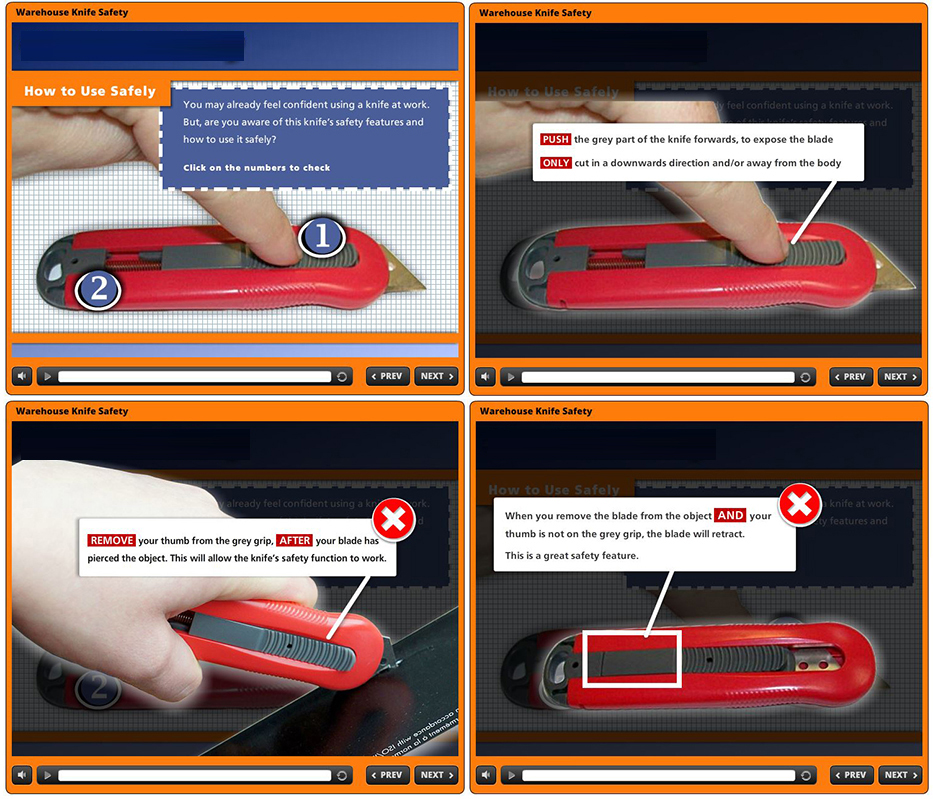 I was provided with PowerPoint instructions for this knife. English was the author's 2nd language. It wasn't until my slides were proofed and I visited the warehouse till I realised I had completely misunderstood the written instructions.

Studying the actual object can make such a difference! 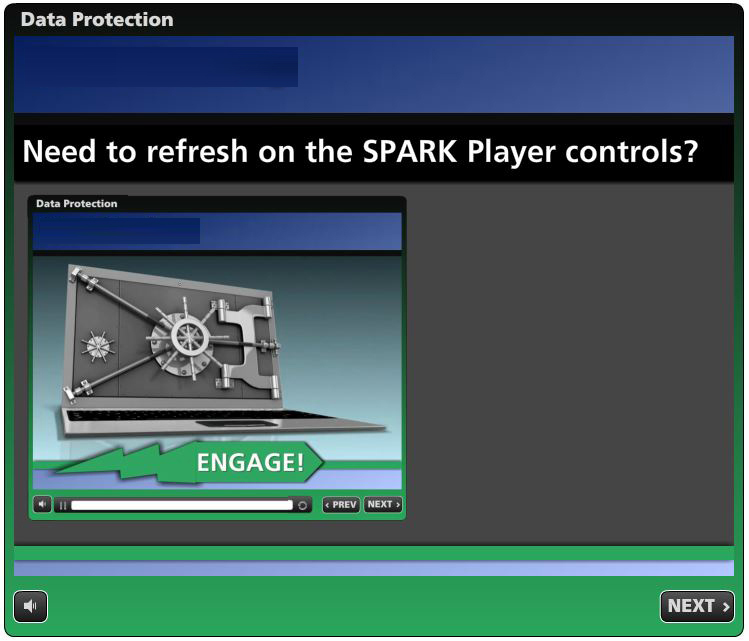 I redesigned the Articulate players to make better use of the software. So, I had to redesign the interactive demo for the player controls.

I simplified the interaction for this slide, in my redesign. 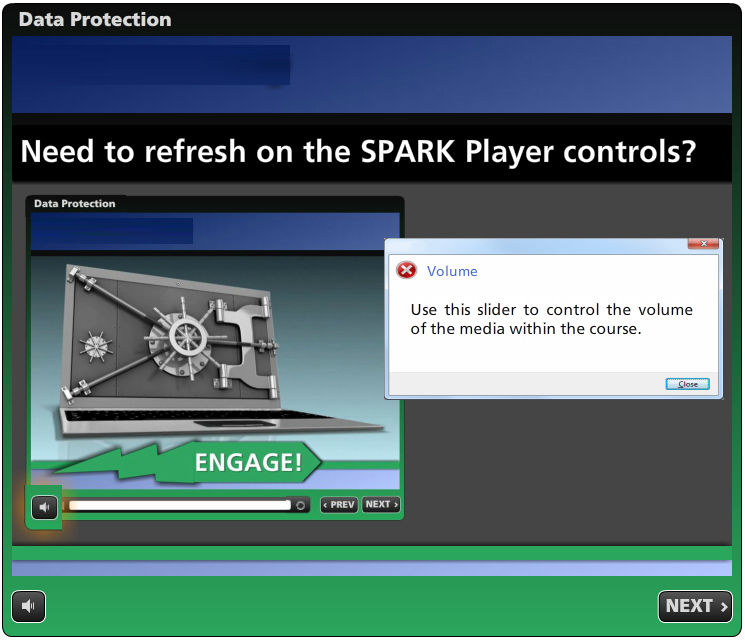 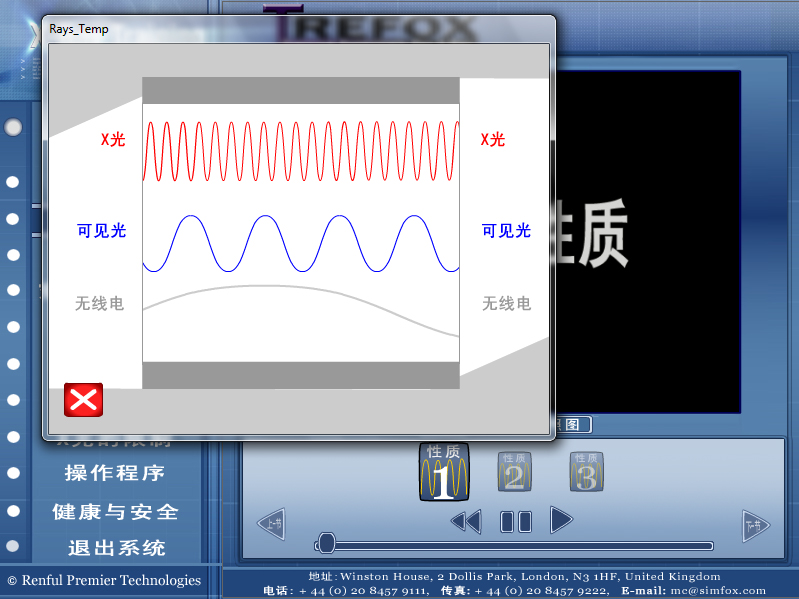 The electromagnetic spectrum in Mandarin

This chapter explained the electromagnetic spectrum and how x-rays fitted in to it. This screen is taken from the Chinese translation of Trefox. 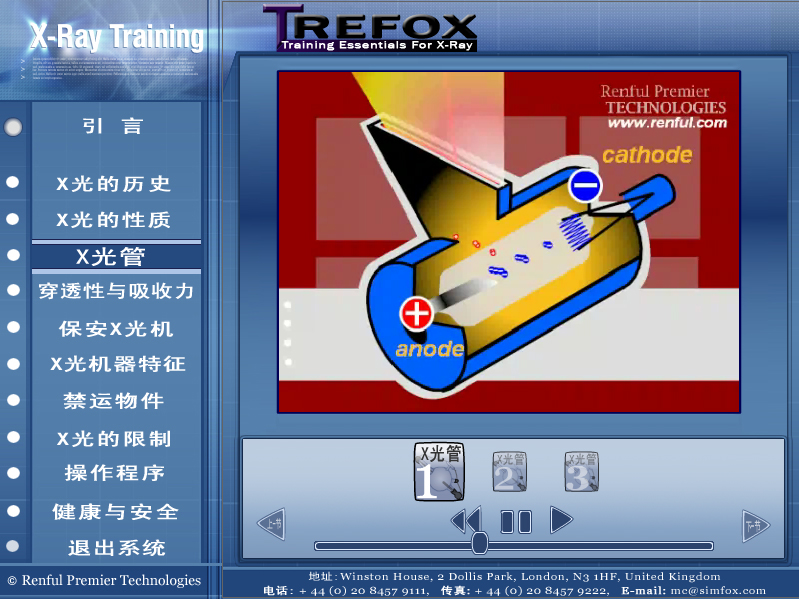 Anode and Cathode in the x-ray tube

This chapter to a brief look at how X-rays were created. I had to prepare a brief for this animation to send to an outsourced animator. 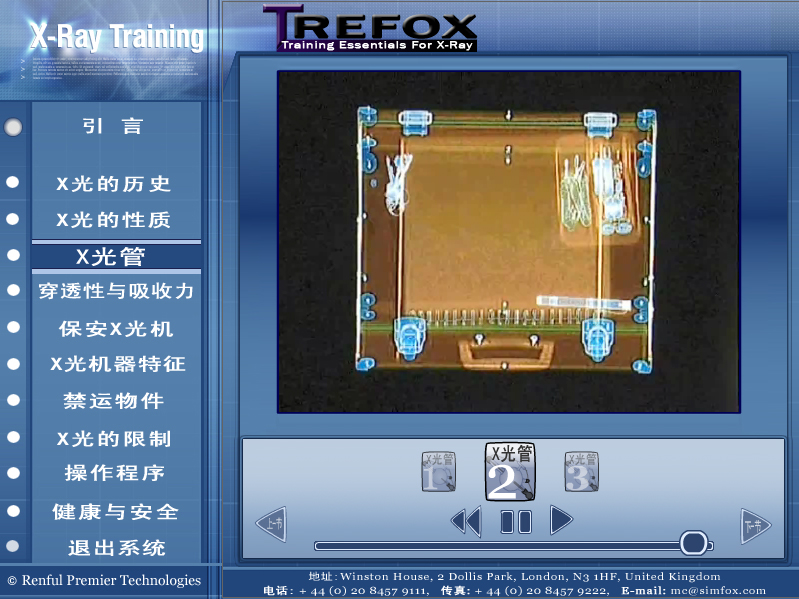 Many attempts were made to provide quality video of a real x-ray machine in operation, using our simulator. This material was used throughout the TREFOX program. 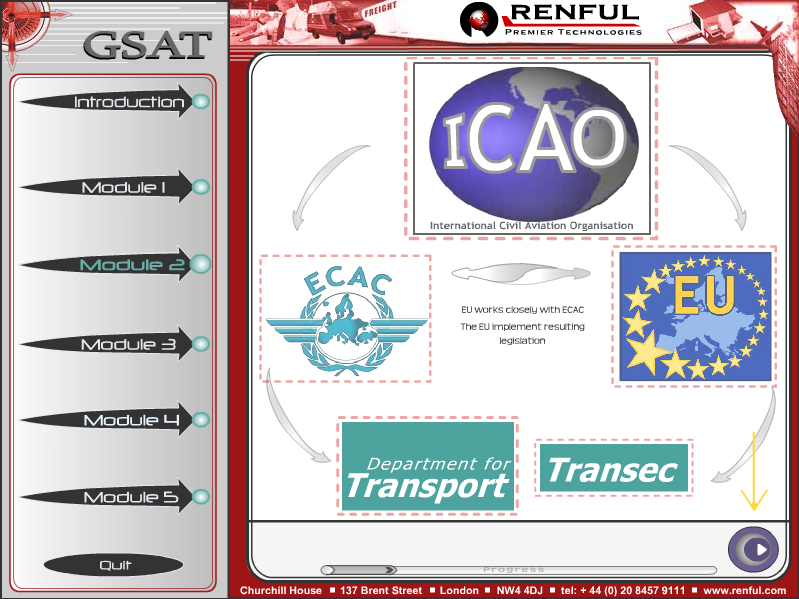 I found it hard to remember the main organisations and their role within aviation security. I used icons, diagrams, animation and interactivity to increase clarity that a verbally delivered course couldn't offer. 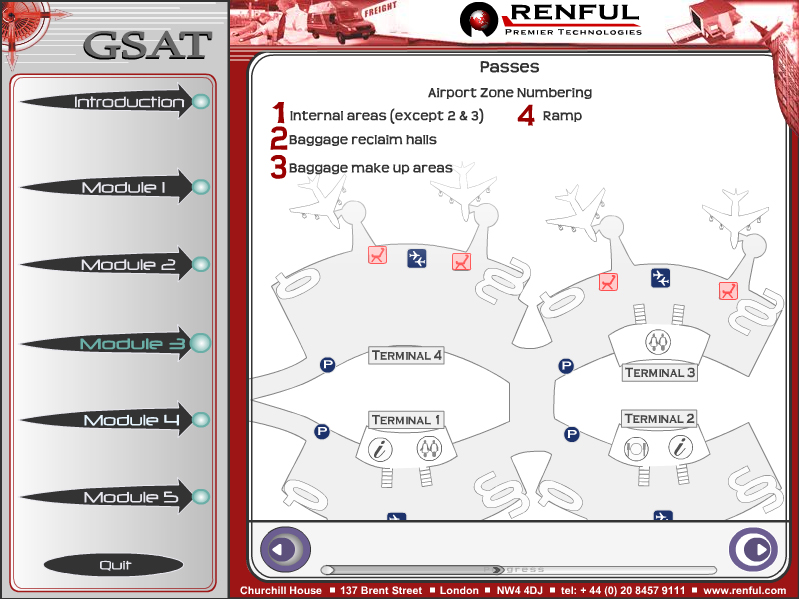 I also loved producing this animated diagram, in time with the audio, to illustrate the different areas of an airport and the access restrictions associated with each. 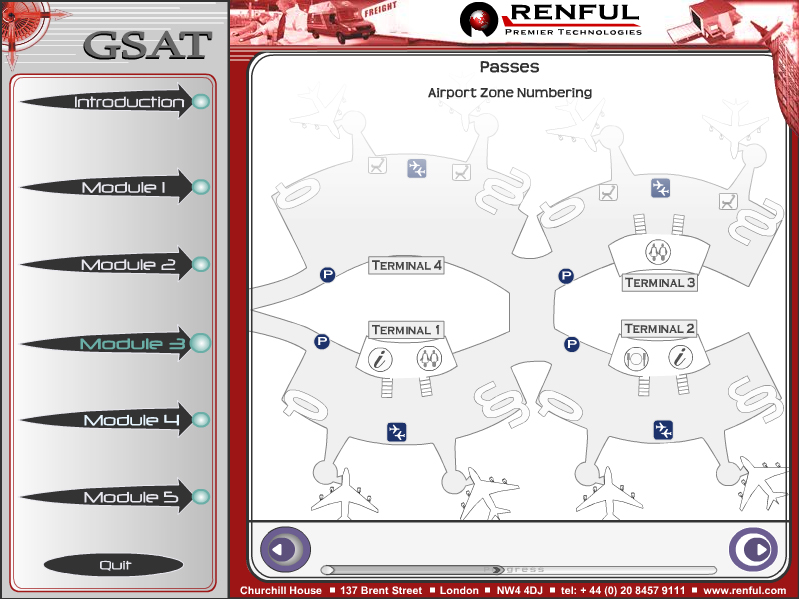 The Diagram was created in Illustrator and animated in Flash, allowing the user to skip back and forth between the animated and narrated explanations of each zone. 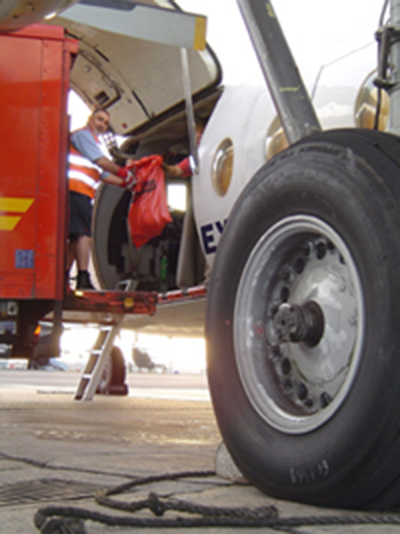 I was involved in recording visuals for this program. We filmed Bournemouth airport's over night cargo operations. I also took many stills that were used in the course and other products. 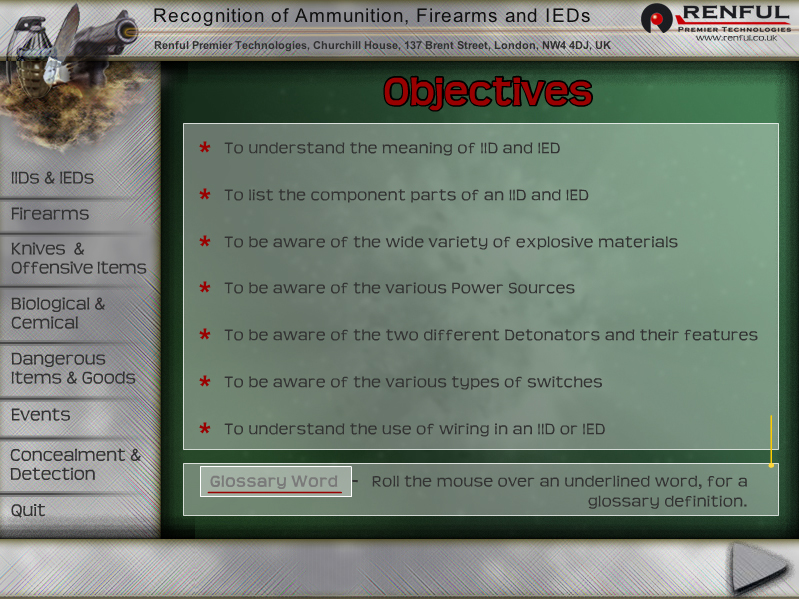 I developed and animated learning objectives for each section of the course.

Each objectives screen also features a reminder that a small pop up glossary is with the user throughout the course and attached to all 'technical' words. 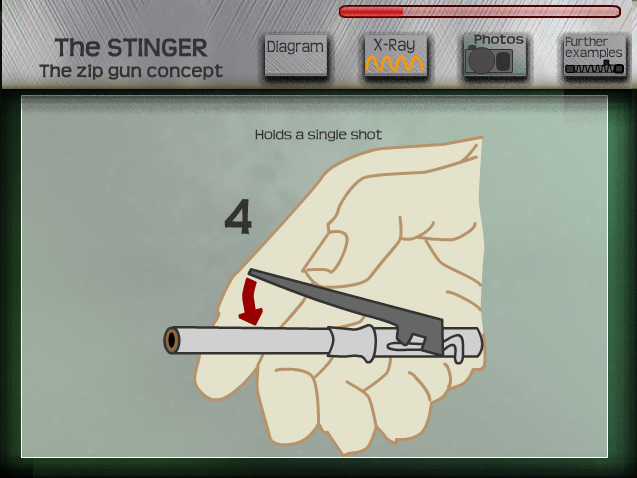 The next 14 screens show where I was left to my own imagination to present this course. I created many combinations of interactively controlled animations and examples where the user could flick from an X-ray view to a photo and then conceal the item to see how detection can be made challenging. 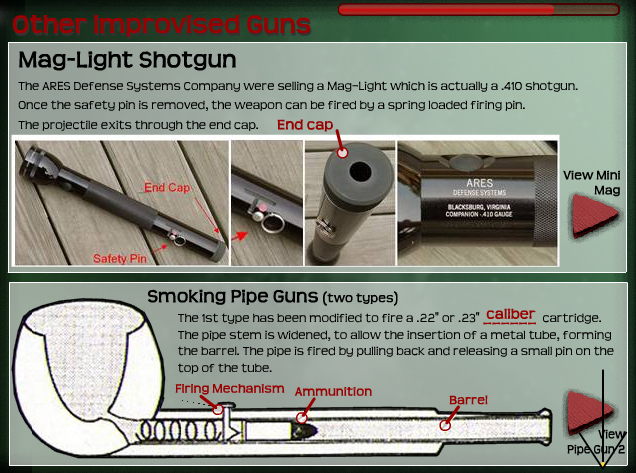 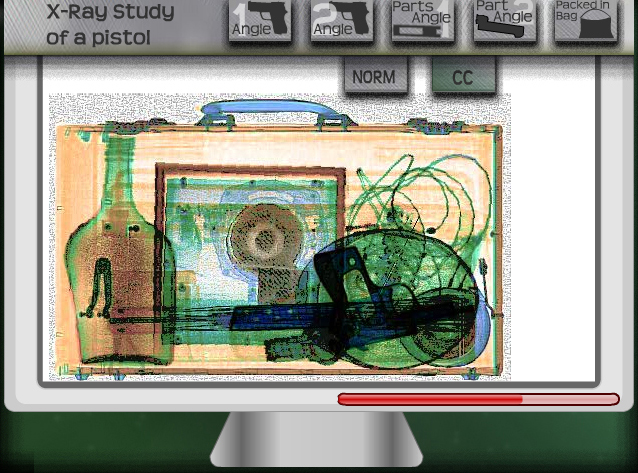 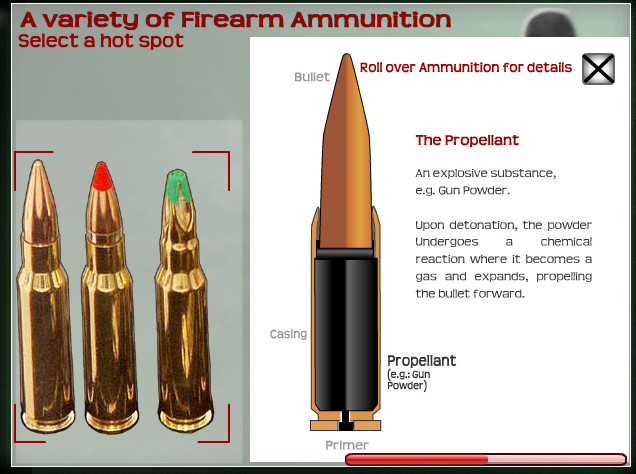 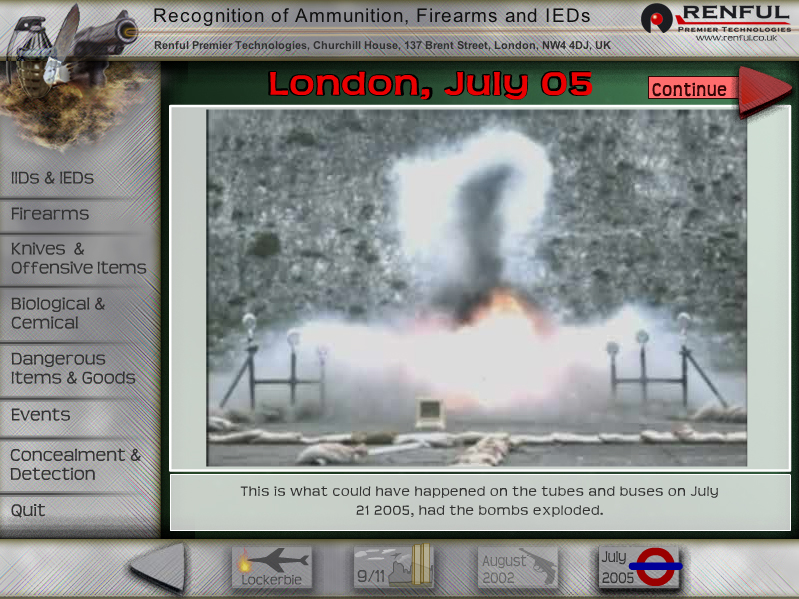 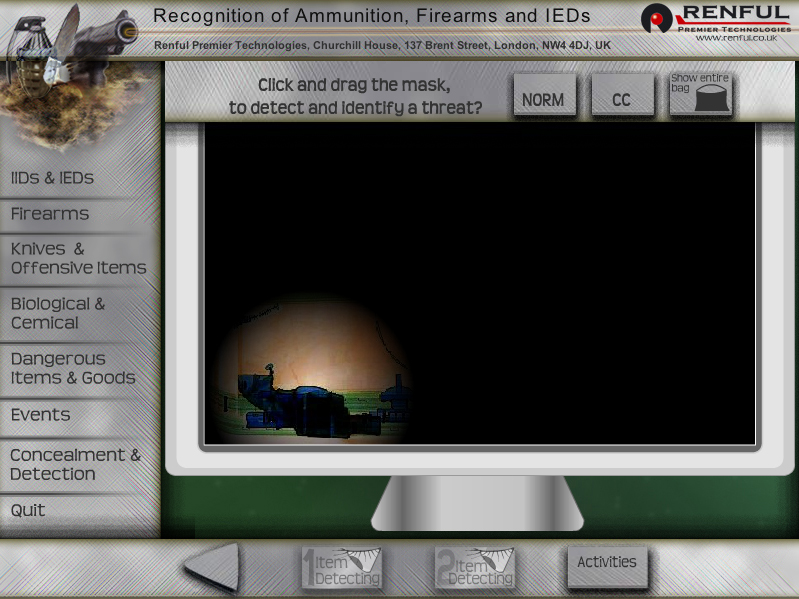 After completing the course I was requested to produce, I found time to create an experimental interactive feature. My idea was to encourage a different way to assess an X-ray image (supposedly a more effective way but one I found less instinctive).

I began the exercise by showing an entire bag under X-ray with a threat item visible. I then covered the image with a black mask and provided a small hole through which a small part of the image could be seen. The idea was to move this hole around the X-ray image, to identify the threat item.

After the animated introduction, I provided a fresh X-ray image, with a harder threat item concealment. The user could move the hole in the mask around the x-ray image and change to the image to Crystal Clear if they needed. There was no time limit to identify the threat. This was an exercise to force the user to take a different approach. To avoid looking at the bag or even an item as a whole, but assess every element of the bags content and decide if it added up or whether an element was out of place.